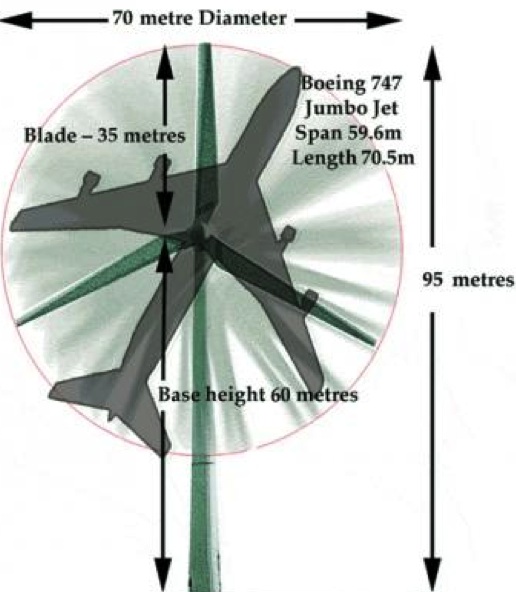 THE blades on new wind turbines being built by a Dublin company and set to be plonked overlooking Glenties are BIGGER than a JUMBO jet, plans uncovered by donegaldaily.com reveal.

The turbines will be set on poles 100 metres high – and the blades will be an incredible 70 metres wide.

That’s bigger than the length of a plane, as our exclusive graphic shows.

The project was passed by Donegal County Council planners with objections thrown out, as we revealed five days ago.

Now we can also reveal that county councillors have now pledged to oppose the wind farm development on a range of environmental grounds.

We can also reveal that 75,000 cubic metres of bogland will be ripped up to make way for an astonishing 11 kms of gravel roads so that turbines can be installed.

And there will be 25 of them dotted around the picturesque town of Glenties.

The only beneficiaries of the project will be the Dublin company behind the business and some farmers who stand to collect annual rents.

But the turbines will affect numerous birds – including the golden eagle – as well as a host of other animals and plantlife, say campaigners.

A meeting on Sunday night heard a series of objections from flabberghasted local people who fear their lives will never be the same again.

And with 25 jumbo-sized turbines overshadowing the area, it will change the landscape of the area forever.

Anne-Marie McDermott, who was one of those at the meeting, said: “The meeting had originally been called as an information night. It still was an information meeting but a lot of anger was expressed about the manner in which the application was dealt with by the planning authorities.

“Accepted and acknowedged (in writing) submissions were later rejected when the date for making submissions had passed. This allowed no re-submission. Some of these submissions had been handed in personally and okayed by the planning department but later ruled out on technical grounds.

“We will oppose these plans at every opportunity.”