FINN HARPS GO BACK TO SCHOOL WITH UNIQUE INITIATIVE 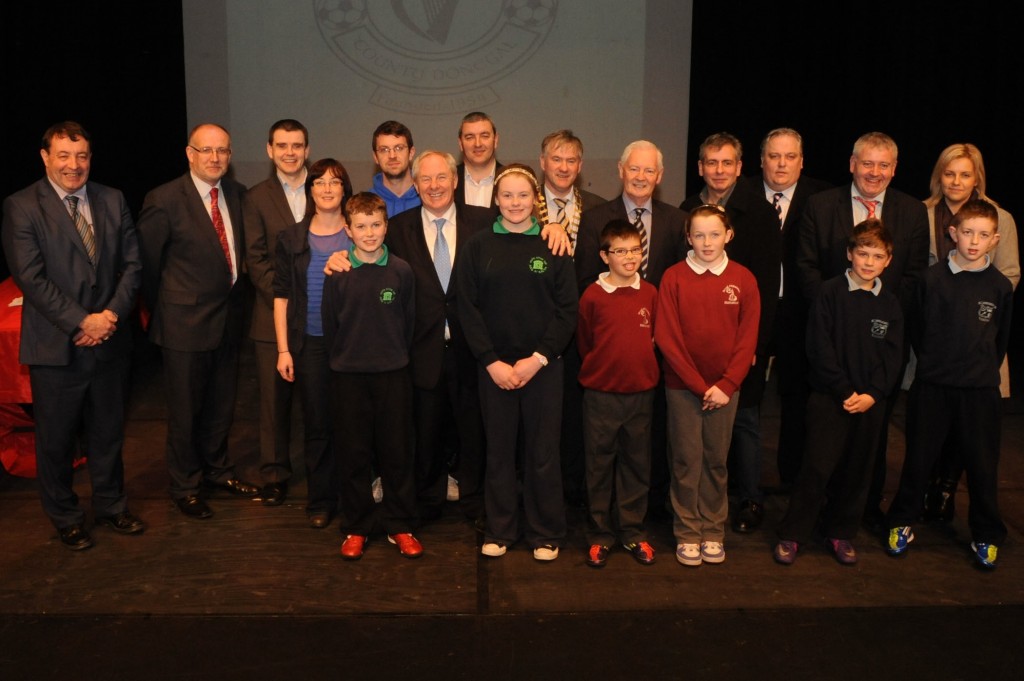 The Minister of Sport and Tourism Michael Ring TD officially launched the new Finn Harps Schools programme at the Balor Theatre on Thursday, and described the project as “a wonderful initiative.”

Finn Harps players, coaches and staff will work alongside 30 participating schools across the County on a comprehensive two year programme, where schoolchildren will enjoy a variety of sporting and community activities.

Minister Michael Ring said: “I believe this is the most wide ranging community programme to be developed by a senior football club in the whole Country, so its gives me great pleasure to be here for the official launch. I am delighted to see Finn Harps and local Schools working together to develop a unique and innovative project which will bring educational, social and sporting benefits to schoolchildren in Donegal.”

Minister Ring also spoke of “the exciting sporting and economic opportunities” the new Stadium project will bring to the North West.

“The FAI have been continually impressed with the range of community projects Finn Harps bring into Donegal, and we often cite Finn Harps as an example of what can be achieved when we are talking to other senior Clubs in the League,” he said.

Mr Gavin also made himself very popular in the Balor with a “one for everyone in the audience” moment by inviting the attending Schools to be the FAI’s guests at the forthcoming Ireland v Czech Republic game in the Aviva Stadium!

Project Manager for Finn Harps Schools programme John Campbell said “Finn Harps are delighted that we are working in these thirty schools throughout Donegal where in total 5294 children are registered.

“All the Finn Harps personnel involved in the Project will be either qualified coaches or Harps Players from the first team Squad. We look forward to working with the Schools involved and we thank all the schools who applied to enter the programme.

“We also are looking forward to working with Ulster Senior League, Donegal League and Inishowen League clubs in developing a strategy to bring expert coaching into Donegal Schools. It is an exciting project for us here at Finn Harps and all of us are looking forward to the challenge and opportunities that this programme presents,” he added.

Donegal Mayor Cllr Noel McBride said: “I was very happy when I heard Finn Harps were launching this project because the club has shown they can use their profile to make a very positive contribution to public life in Donegal.

“For example over the past couple of years I have been very impressed with how Finn Harps have worked with Donegal Road Safety, teachers, parents and school children to help increase awareness surrounding road safety issues within the County. I look forward to helping Finn Harps and the schools further develop the initiative in the near future,” he said.

Minister of State for Gaelteacht Affairs Dinny McGinley spoke passionately about the dedication Teachers bring to their communities:

“I would like to congratulate Finn Harps on the launch of this exciting initiative which will support the tremendous work done by Teachers across the County.” Minister McGinley also expressed his delight that Finn Harps are introducing the programme through the medium of Irish to gaelteacht areas in Donegal.

“I would like to thank John Campbell, the Finn Harps players and our club volunteers for making this ambitious programme a reality. We are delighted to have Minister Ring and Fran Gavin here for the launch as we are also liaising with both the government and the FAI on an ongoing basis, regarding the new stadium project. I would also like to thank all the participating schools, teachers and schoolchildren for their commitment to the programme and everyone at the club is looking forward to making the project a huge success.”