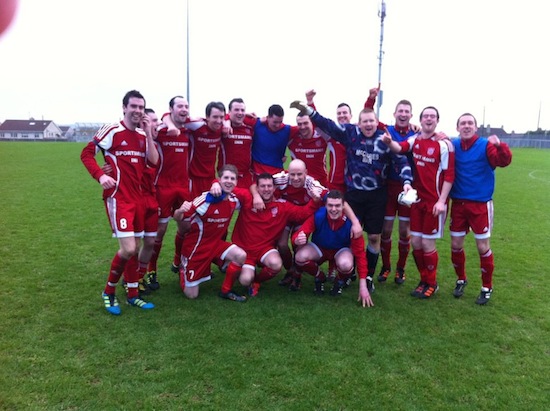 CARNDONAGH FC did their town proud on and off the field today as they took on Ballymun United in the quarter-final of the FAI Junior Cup.

Off the pitch the local club and supporters got together to repair a marquee – damaged overnight by vandals – to make sure visiting team Ballymun United got a warm reception.

Tea and sandwiches were laid on for all concerned.

On the pitch the Donegal side lost 2-0, but they played well in difficult conditions against a better United team on the day.

And when the game was over Carndonagh were first to congratulate the visitors and wish them well for the semi-finals.

A club spokesman said “There’s no shame losing in the 1/4 final of The FAI Junior Cup. It was a great effort. We’ve a cup final in 2 weeks and we’ll now switch our focus to that.

“We offer warm congratulations to Ballymun on their victory and good luck to them in the next round.”

He praised club members and supporters for repairing the damaged marquee.

“Their (vandals) efforts did not work,” he said.