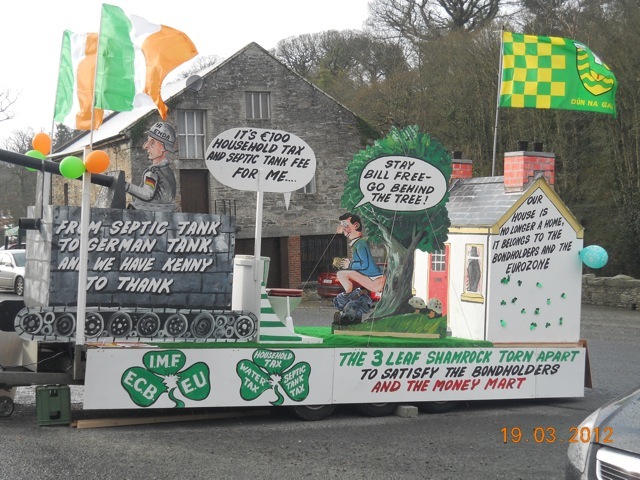 Anti-austerity campaigners in Donegal are targeting post-offices to stop people signing up to pay the €100 household charge.

The pensioners were approached by members of the local ‘Can’t Pay Won’t Pay’ group who specifically targeted the outlets where people can pay before the march 31st deadline.

“We are winning small victories all over this county. We spent all of last Friday at the local post office here in Ramelton.

“A total of 52 pensioners signed our petition and have said they will refuse to pay. Only a couple of people said they would pay,” he revealed.

The group yesterday upped their campaign and placed placards in both Irish and English across the county.

In Ramelton, protesters unveiled a float ridiculing the Government’s policy.

It featured Taoiseach Enda Kenny dressed as a German gunner with the slogan ‘From Septic Tank to German Tank and we have Kenny to Thank’.

Another part features a man going to the loo behind a tree, with the words ‘Stay Bill Free, Go Behind A Tree.”

Mr Duffy added the various new charges would drive tourists out of a county which badly needs them.

“Because it was a Bank Holiday weekend we obviously spoke to many people from the North who have already been whacked with a second house charge and now face more household and septic tank charges.

“This will drive tourists away and will certainly reduce the spending power of those who have holiday homes in Co Donegal and other counties.

“The Government are trying all sorts of bully-boy tactics to get people to register but once the registration goes through we will all be paying a lot more next year.”

He added: “I’ll go to jail before I pay any of these charges and there’s a lot more like me.”