FLANAGAN’S FURNITURE OPENS AGAIN MONTHS AFTER IT WENT INTO LIQUIDATION

One of Donegal’s best-known furniture companies has opened again – just months after it went into liquidation. 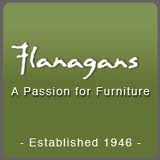 Flanagan’s Furniture went bust last November with the loss of up to 50 jobs in stores across the country including its main outlet in Buncrana.

But now the family behind the company have announced they are back in business.

However anybody hoping to exchange vouchers or collect furniture from Flanagan’s of Buncrana will not be able to do so.

The company sent text messages to thousands of customers over the weekend.

The text message said ‘Flanagan’s Furniture is back! Showrooms at Shore front, Buncrana.’

However despite contacting thousands of customers using previous contact lists, a spokesman at the new furniture outlet stressed they were not the same company.

They said they were run by the Flanagan family but the old company was in the hands of liquidator Deloitte and Touche.

“We are a different company. The previous company had a lot more employees – we only have three.

“If you have a voucher or something then you will have to contact the liquidator,” said a spokesman.