A daring gang of jewellery thieves has escaped with several thousand euro worth of valuables from a Donegal shop. 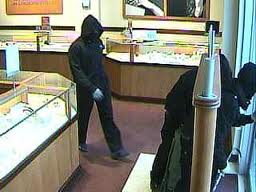 The gang struck in the early hours of this morning at McCullagh’s Jewellery shop at Letterkenny Shopping Centre.

The thieves are believed to have struck just before 4am in a well-planned and orchestrated raid.

The gang got into the shopping centre through the roof.

Once inside they then broke their way into the jewellery shop by cutting a hole into the premises from an adjoining store, The Zone.

The thieves escaped with what is believed to be several thousand euro worth of jewellery.

Most of the items were taken from display shelves in the shop.

The shop owners are currently carrying out a full stock-take of equipment to see exactly what is missing.

Detectives are currently trawling CCTV of the area as a hunt for the gang gets underway.

Forensic detectives are also on scene carrying out a full examination of the scene.

Garda Superintendent Vincent O’Brien said he believes the gang had been planning the heist for some time.

“It appears to be a very well planned and well-executed operation. These people knew exactly what they were about.

“We would ask anyone who was in the vicinity of the Letterkenny Shopping Centre at Port Road between 3.45am and 4.15am to contact Gardai,” he said.