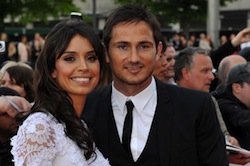 ‘NO PLANS TO MARRY IN DONEGAL’ SAYS CHELSEA’S FRANK LAMPARD

The Chelsea player and the Co Down-born TV presenter are engaged.

Rumours have linked the pair to a July wedding date at the Solis Lough Eske Hotel near Donegal Town.

But a spokesman for the pair said today: “There are no plans for a wedding this summer in Ireland.”

Of course that won’t stop the rumours continuing!

The hotel refused to comment one way or the other, adding to the speculation.