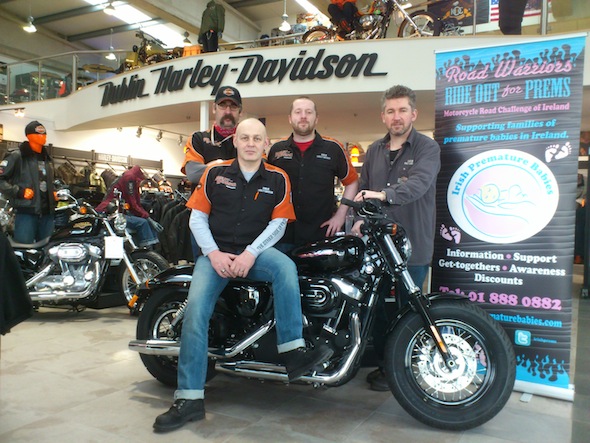 A group of 30 motorbike enthusiasts will take to the roads next Thursday (26th April) to raise funds for life-saving equipment for Neo-Natal Intensive Care Units and Special Care Baby Units in hospitals from Letterkenny to Limerick.

The four-day ‘Ride Out For Prems Motor Bike Road Trip Challenge’ will take place from 26th to 29th April to help raise funding for vital equipment such as incubators, heart monitors, ventilators and apnoea monitors for babies who have been born premature and may have developed complications or need extra support in the early stages of their lives.

This will give the participants a wonderful insight and opportunity to see firsthand what a difference their fundraising efforts will make. The bikers will also be able to meet with the parents and medical staff that they are helping through their fund-raising motorcycle ride.

Irene Dowling of the Irish Premature Babies Association says; “We are delighted that the motorcyclists are going to “ride out” for vital life-saving equipment for babies in the neo-natal and special care units. Every rider had to raise €1,000 to go on this trip so, between the guys on the bikes and all our generous sponsors, it was a huge commitment by these people to help out, many of whom had no ties to prematurity or the charity.”

“The main person behind this trip is a Harley Davidson enthusiast called Sean Brennan.  Sean originally did a trip similar to this last year and was so emotionally touched by what he saw in the units and with meeting families that he felt he had to do even more to raise awareness and funding this year. Sean, along with members of the IPB team, have worked tirelessly on this event over the past twelve months, which has accumulated with up to 30 bikers participating in the road trip and visiting nine Neo-natal units around the country,” Irene adds.

To find out more or to learn how to join, please log on to the website www.irishprematurebabies.com and register in the events page or email irishprematurebabies@gmail.com  If you wish to donate to the Irish Premature Babies Association, you can text prem to 57802.

Pictured above: Some of the motorbike enthusiasts who are participating in the four-day ‘Ride Out For Prems Motor Bike Road Trip Challenge’; pictured sitting on the bike is Brian Kirwan; back row from left to right; Derek Smith, Dave Humphries, Jeff Murphy, MD of Harley Davidson Dublin