Gardai have told a well-known animal welfare group that they are following a definite line of enquiry in the case of Chance, the abandoned boxer dog. 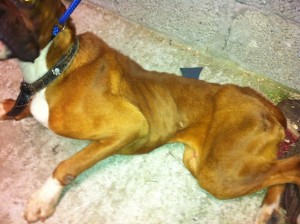 The dog was found by members of Donegal Pet Rescue in the St Johnston/Carrigans area more than a month ago.

The dog was chained to a post in a back garden without food or water after being left behind by its owners up to a month previously.

It has since made a miraculous recovery at a foster home and has been give every chance of survival.

The matter was reported to Gardai who set about tracking down the family who allegedly abandoned the dog.