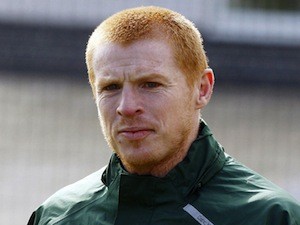 FROM NEIL DOHERTY AT CELTIC PARK: Neil Lennon heaped praised on his team and fans – and had a good word for the Rangers manager and supporters too – as Celtic crowned a superb season with an easy 3-0 win over their Old Firm rivals.

There is some speculation that this may be the last Old Firm game for a while because if Rangers do go into liquidation, they could be in Division 3 next season.

“Rangers ’til I die” sang the visiting supporters.

“Rangers ’til July” was the Hoops fans’ response.

With the SPL title already sewn up, Celtic enjoyed this match and certainly the fans did too.

It had all started differently this afternoon.

Rangers had started brightly, but any resistance seemed to disappear when the brilliant Charlie Mulgrew dived unmarked to head Celtic into a 17th-minute lead.

And Gary Hooper blasted in from distance nine minutes after the break to seal the win.

Neil Lennon had a few words for Ally McCoist afterwards: “It was as emphatic an Old Firm win as I’ve seen for a Celtic team for quite a while.

“I think Ally’s been left high and dry by a lot of people.

“And basically he’s been the spokesperson for the club for the last three or four months.”

“They’ve had a tough week and Ally’s had to deal with things that football managers shouldn’t have to deal with.

“That’s a huge distraction from what he’s trying to do and, in his first season as well, he’s had to take on a lot.

“I wouldn’t have liked to be in his shoes.”

Celtic, who had already clinched the title, are now 21 points clear of the former champions, who were docked 10 points for going into administration.

“What’s gone on, Rangers are getting punished for it, the fans are suffering for it, but I think Ally’s the one who’s suffered more than anybody,” said Lennon.

Lennon and McCoist were at each other’s throats last March – but that’s way behind him.

“There’s tensions always around these games, but I think we have a healthy respect professionally for each other,” he said.

“It is a dog-eat-dog business, it’s me or him, and it’s my day today, but he’s had a couple of days at Ibrox this year where they’ve come out on top.

“From a personal point of view, I’ve got a lot of time for the guy, but professionally I have to do my job and what’s best for Celtic.”

Lennon was delighted with the performance of his side, who had lost the reverse fixture 3-2 at Ibrox last month.

“It has been a great day for the club – and the players and the supporters,” he said.

“I couldn’t be more happy with the performance.

“We adapted to the system after about 15 to 20 minutes and we were excellent.

“I wanted them to start the second half well and we did that and, to be fair, Allan McGregor’s made a brilliant save from Joe Ledley and then we score a great third goal.

“And, after that, it could have been a question of how many.

“But, overall, I can’t ask much more of the team today.

“We were exceptional. It is really difficult to single out players, but the whole team as a unit was magnificent.”