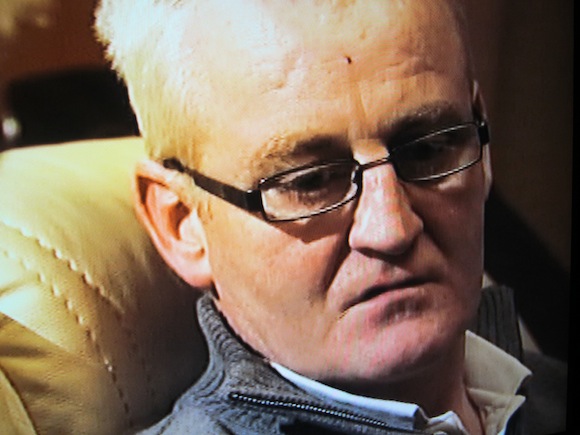 written by admin May 1, 2012
Facebook0Tweet0LinkedIn0Print0

A VICTIM of shocking child sex abuse whose confrontation with Father Eugene Greene helped to bring the pervert priest to justice has broken his silence.

Speaking to reporter Darragh MacIntyre on the BBC on Tuesday night, Conal Melly, pictured, told how he threatened to kill the priest during an angry confrontation in 1997.

He also demanded IR£5,000 in compensation.

But Greene called Gardai claiming he was being blackmailed – and instead Gardai launched a full investigation into Mr Melly’s claims that Greene was a secret sex pervert who had abused dozens of boys in parishes from Glenties to Gortahork.

As a result of the investigation – involving Detective Martin Ridge – Greene was jailed for 12 years for the abuse of 26 boys.

“You’ll never forget it, it’s with you for the rest of your life, and there’s nothing you can do about it,” said Mr Melly in the BBC documentary about Greene’s appalling attacks on him.

Asked what he said to Greene during the confrontation, he said: “I told him that he would – I asked him did he remember me and he said no. And er I said you remember abusing me when I was young. He says he never abused anyone. Never.

“I can’t remember exactly what I said to him but I said I would fu**ing kill him. I think that’s why he – it frightened him…He never admitted knowing me.