written by Stephen Maguire May 2, 2012
Facebook0Tweet0LinkedIn0Print0

It has emerged that a seven month old baby was in the house in which a man was brutally attacked in St Johnston last night. 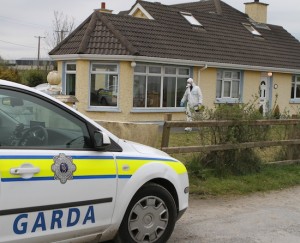 The infant, believed to be the man’s son, was unhurt during the ordeal in which the victim was shot four times in a paramilitary-style shooting.

The man, who is originally from Derry, was rushed to Letterkenny General Hospital but has since been transferred to a Dublin hospital.

There are now fears he may lose one of his limbs after being shot once in each legs and also in the shoulders.

The attacked happened at a rented house at around 10.45pm last night.

The man, 29, who is originally from Derry, had been living in Co Donegal for a number of months.

It is understood the attack was carried out by two armed, and masked men.

No group has yet claimed responsibility for the attack.

Gardai are liaising with the PSNI in Derry in relation to the horrific attack.

Garda Supt Vincent O’Brien has appealed for anybody who was in the area between 10.30pm and 11pm to contact them with any information they may have.

The incident is the first in Donegal since Andrew Allen was brutally murdered in Buncrana on February 9.

That shooting was claimed by Republican Action Against Drugs. It’s not known yet whether last night’s shooting is linked.