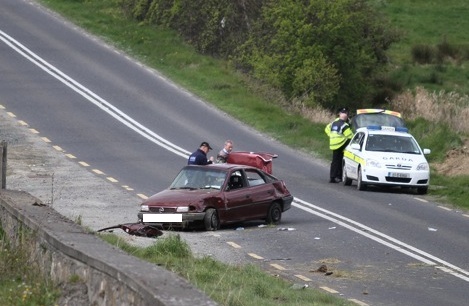 written by admin May 6, 2012
Facebook0Tweet0LinkedIn0Print0

A MAN has died at the scene of a road traffic accident in Co Donegal this afternoon.

The male passenger was killed when an Astra car he was travelling in veered off the main Letterkenny to Lifford road at Murlog, close to the Raphoe junction.

The driver has been taken to hospital with a number of injuries, which are not believed to be life-threatening. A second passenger was also hurt in the crash.

The dead man is believed to be in his early 20s and from the Newtowncunningham area.

Gardai say the road will be closed for several hours while an investigation is completed.

Ambulance crews and Gardai rushed to the scene of the crash, but the passenger was later pronounced dead at the scene.

The car left the road at a spot where GoSafe speed vans are often located.

It is a notorious accident blackspot.

It’s understood no other vehicles were involved in the accident. Garda technical officers are at the scene.

Gardai have appealed to motorists to avoid the area for the next few hours while the investigation is completed.

The bank holiday weekend tragedy came just hours after Gardai had made an appeal to motorists to drive safely.