written by Stephen Maguire May 10, 2012
FacebookTweetLinkedInPrint

One of the world’s biggest bands are set to appear at Letterkenny nightclub The Pulse. 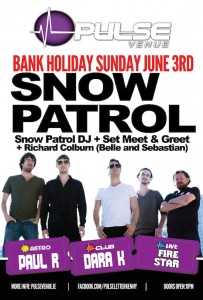 Snow Patrol have sold out stadiums around the world and sold millions of albums with a number of chart-topping hits including Run and Chasing Cars.

Now they are to play a DJ set and stage a ‘meet and greet’ for some lucky fans at the venue on Bank Holiday Sunday, June 3rd.

Facebook pages have been inundated with comments since details of the event was announced earlier this evening.

The announcement has been confirmed on the official Pulse website.

Many fans are asking if the band will play a live set when they appear at the Port Road venue.

It is also unclear if all members of the band including lead singer Gary Lightbody will appear for the show.