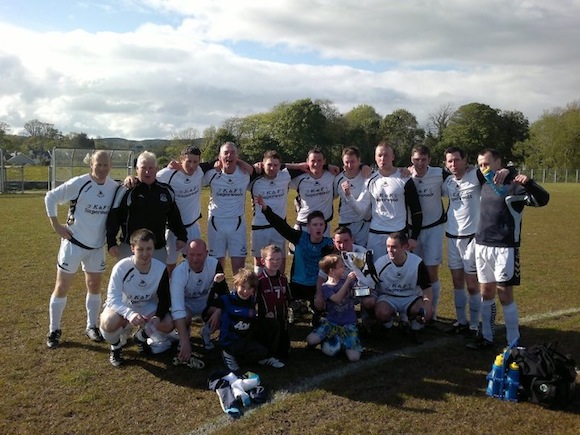 The Downtown Cup final was played on Saturday past down at the Flagpole, Rathmullen. The two giants of the Saturday league went head to head, Kilmac and Glencar.

On the two previous league encounters this season both games ended in draws and the likely hood was that this final would be no different as indeed was the case.

Paul Doherty was the referee with Marty Quinn and Barry Hunter his assistants . A large crowd was in attendence at the flagpole.

The venue had to be switched from Ballyare to Rathmullen as the Donegal League deemed Ballyare unplayable due to the fact that of all the rainfall during the week. The game kicked off at 4pm, like was anticipated the game got off to a blistering pace with both teams looking to get an early goal and settle any nerves that they may have had.

The opening 15 minutes belonged to the Lurgysiders as they completely dominated this period and it was no surprise when they took the lead on the 15 min mark when Marty Sweeney won the ball in midfield and played the ball to Kevin Wappa Mc Menamin on the center circle and the wee man poked the ball between two Glencar defenders then completely outpaced his opponents as he bared down on goal where he Cooley placed the ball wide of the advancing Glencar goalkeeper Pajo Rafferty to give Kilmac a well deserved lead.

Glencar came more into the game as you would expect, they had alot of possession whilst never able to get in behind the Kilmac rearguard which were marvelous to day.

Manager Raymond Shields opted for experience rather than youth for this particular contest and it payed off as Glencar struggled to get any joy over the Kilmac defence, evergreen Shaun Bugie Sandilands was excellent in the sweeper role and big Gary Gorman won everything in the air, John Doherty was surperb at right back he did not put a foot wrong all day.

Gavin Gorman at left back was his usual composed and brilliantly effective no nonsence approach, he played really well. Shaun Budgie Sandilands in the sweeper role, well he simply defies age, he has the experience  and he reads the game really well he was the engine of our defence .

Big Gary Gorman at centre half, Gary will play in any position you ask him, well he is at home in the center half role and he was one of the reasons why Glencar never got in behind. Marty Sweeney and James Gorman bossed midfield espically in the second half, they were winning 50-50 ball’s and one of they reasons why Kilmac came up the road with the cup, all the manager said to the two boys in the half time talk was simply give another 15% lads and we will win this cup and that is exactly what they did fair play.

Shaun O Donnell and Paul Mc Eldowney were magnificent on the flanks both lads worked their socks off and both deserve great credit again they played a major part in our victory. They have Pajo we have Wappa, that was all the talk around Letterkenny in the build up to this final, it may be only a Saturday League Cup final but i can tell you that was all that was talked about in footballing circles all week, iv heard things like Glencar have more quality, Kilmacrennan have more experience, Glencar have Pajo, Kilmacrennan have Wappa, Glencar beat Kilmacrennan in last year’s cup semi-final so Glencar are favourites to be honest people have funny ideas and any one can win in a final.

Wappa literally ran himself into the ground, getting two of our goals, simply the wee man is a genius on the ball he reminds me of a youthful George Best perfectly balanced a real sharp shooter and definitly the reason why we are champions and it is no coincidence that the wee man is receiving the Willie Duffy Div 1  Donegal League  Player Of The Year later on this month, he deserves it. Darren Mc Ginley, Wapa’s strike partner is one of those players you couldn’t leave out of a team. Darren is one of those players that comes up with vital goals in big games and today was no different when Darren got that all important vital third goal that killed the game off as a contest. Like i said earlier Glencar were enjoying alot of possession but never looked like getting in behind the Kilmac rearguard . Towards the end of the first half Kilmac were giving away to many stupid freekicks deep in their own half and if you keep giving freekicks Glencar have quality in their ranks and eventually they will hurt you, 37th minute we got hurt when Gary Gorman was adjudged to have raised his foot to high in an effort to clear the ball up field as his foot grazed Eugene O Sullivan on the head referee Paul Doherty gave Glencar a freekick right on the edge of the penalty area.

Chris Malseed hit a rasper of a shot that totally deceived Mark Gallagher in goal, just prior to that goal Mark brought of a fabulous instinctive save from the head of Declan Scanlon following a corner kick. The halftime whistle blew and the Kilmac lads headed into the dressin rooms and in my opinion Glencar made a fatal mistake in not doing the same as im told they were very quite during that break. We had the time and peace to reflect on our mistakes and try to correct them and take the positives out of it and go on from there.

Our halftime team talk worked as we definitely enjoyed most of the possession in the second half and fully deserved to win. Wappa delivered the all important goal with 13 min left on the clock after a brilliant run from Shaun O Donnell up the right hand side where Shaun cut inside beating three players before slipping Wapa through on goal this time Wapa simply shimmeyed the keeper leaving him on his bum and rolled the ball into an empty net 2 – 1  dream land. Just before Wapa scored two minutes earlier Mark Gallagher was adjudged to have brought down Eugene O Sullivan as he made strides inside the Kilmac penalty area Paul Doherty had no hesitation in pointing to the spot.

None of the Glencar players seemed to want to take the penalty a little bit of confusion their normal penalty taker Pajo Rafferty didn’t seem to want to take the penalty, eventually Anthony Doherty summoned up the courage to take the spot kick, he never looked comfortable , when the referee blew his whistle Doherty only took two steps and struck his spot kick which wasn’t hit with any conviction and Mark Gallagher became the hero when he dived to his left and the ball nestled in his arms you just knew our name was on the cup.

The game was put to bed on the 85th min when Darren Mc Ginley rifled the ball to the roof of the net from close range when Gavin Gorman won the ball o the left hand side before threading the ball through to Wapa who waltzed past two defenders and the keeper before shooting on goal only to see Noel Malseed clear off the line but his clearence fell to Darren who simply couldn’t miss smashing the ball hard and high to the roof of the net.

Kevin Mc Ginley came on late to replace the cramp injured Wapa. In those final minutes big Kevin almost scored when James Gorman released the big man through on goal and Kevin brought a fantastic save out of Pajo in goal where the rebound fell to the feet of Darren Mc Ginley and the wee man composed himself and tried to place the ball high into the corner of the net but his effort was just slightly high of the mark hitting the crossbar and over.

The final whistle blew the cup was ours and the celebrations started and continued into the wee early hours of the niight or should i say the morning. It would be unfair to choose a man of the match as each and every single player played a vital part in winning this elusive cup .Well done to all associated with Kilmacrennan Celtic. Next season is a brand new challenge who knows ” the double ” perhaps?