written by Stephen Maguire May 24, 2012
Facebook0Tweet0LinkedIn0Print0

A Donegal teenager has said a huge ‘thank you’ to the doctors and nurses who helped save her life by fronting a fundraising campaign which has so far raised €11,700. 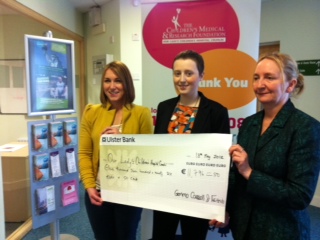 Brave Gemma Carroll from Glenswilly was a perfectly normal girl who felt unwell during study-time for her Junior Cert.

She put it down to nerves but four days later after being admitted to Letterkenny General Hospital she was diagnosed with acute lymphoblastic leukaemia.

Gemma has been in and out of hospital on a regular basis fighting her illness ever since.

But despite this she has helped raise a large amount of money thanks to many local organisations who have held an assortment of charity events from horse ride-outs to running marathons.

Among the events was a Mrs Brown coffee morning which was organised by the Resource Centre and raised a whopping €4,107.

Gemma and her sister Edel last week returned the compliment to Crumlin’s Children’s Hospital by giving a cheque for almost €12,000 to the Medical Research Foundation.

Gemma said “Everyone has been so good and it’s great to be able to give something back after all the wonderful help Crumlin and Letterkenny General Hospital have given me.”