MAN RUSHED TO HOSPITAL AFTER EXPLOSION ON BOAT

written by Stephen Maguire May 25, 2012
Facebook0Tweet0LinkedIn0Print0

A pensioner has been transferred to hospital in Dublin today following an explosion on a boat at Bunbeg harbour last night. 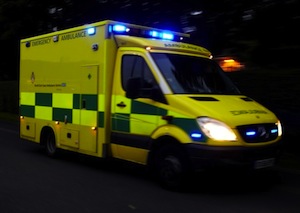 The man, who is from the Annagry area, was initially removed to Letterkenny General Hospital following the blast on the pleasure yacht.

It is understood that two men were on the boat at the time and that the blast may have been as a result of a gas leak.

The emergency services rushed to the scene and tended to both men. It is understood their injuries include burns but are not life threatening.

The boat, that is generally based at Bunbeg harbour, did suffer considerable damage to the deck and wheel house areas.

MAN RUSHED TO HOSPITAL AFTER EXPLOSION ON BOAT was last modified: May 25th, 2012 by Stephen Maguire
Facebook0Tweet0LinkedIn0Print0