written by Stephen Maguire May 29, 2012
FacebookTweetLinkedInPrint

Senator Jimmy Harte has given Sinn Fein the red card after they use the Irish soccer team to call for a no vote in the Fiscal Treaty. 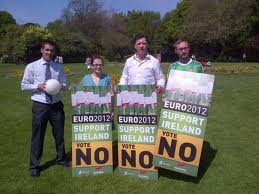 The posters clearly show images of soccer players in the Irish soccer strip and call for a no vote in Thursday’s referendum.

He said as a soccer fan, he found the Sinn Fein tactics “revolting.”

” I am embarrased by the Sin Fein tactics of trying to jump on the football bandwagon and using the soccer fans as Sinn Fein have run out of arguments and have been exposed as telling untruths in the Referendum debate.

“They now have done what no other political party in the country has done, to use Irish soccer for political gain.

“This is what the dictatorships in tin pot administrations did with their sports heroes and as a soccer fan I find it revolting to see Sinn Fein trying to associate themselves with the Irish fans.

“They will use any populist stunt to fool the people, just like Tierry Henri they have no regard for the Irish soccer team but are only after self glory,” he fumed.

HARTE STICKS THE BOOT INTO SINN FEIN FOR USE OF SOCCER ‘NO’ POSTERS was last modified: May 30th, 2012 by Stephen Maguire
FacebookTweetLinkedInPrint
Tags:
FISCAL TREATYnoSenator Jimmy HarteSinn Fein