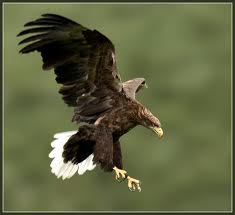 HUNT SABOTEURS have hit out at gun clubs which have offered to shoot animal pests in a bid to stop poisoning of Donegal’s golden eagles.

John Tierney, Campaigns Director of the Association of Hunt Saboteurs, said recent killings of eagles here showed that “despite the extensive education programme about this introduction of bird of prey project the conservation message is not getting through.

“It appears certain individuals regard any bird of prey as fair game and
nothing will change this attitude.”

But Mr Tierney said he was particularly angry at the reaction of the gun lobby in the country.

He told donegaldaily.com: “What is hard to stomach is the reaction of Ireland’s gun movement who shed false tears at every reported destruction incident involving these introduced birds of prey.

“As sworn enemies of birds of prey the shooting community would circulate in the same constituency of those who dole out poison to bird of prey via dead carcases.

“Would it be a major surprise if and when the investigating authorities finally get a prosecution for this avian murder spree that the culprit is a registered firearm holder enjoying local gun club membership.

“An offer by a national shooting organisation to help by engaging in ‘pest control’ in areas where white-tailed eagle exist in attempt to reduce the need to poison wild animals is a brazen attempt at obtaining more shooting rights under the guise of conservation.”

He insisted the conservation of wild birds does not need any assistance from
Ireland’s gun movement.

“Their on-going involvement in the destruction of wildlife both fur and feather renders them a viable threat to the bird of prey introduction project into the Irish countryside,” he said.

“The conservation of Irish wildlife and its habitat does not and never did depend on the actions of those who kill wildlife for fun. They contribute nothing only terror and death to the issue and can be tagged as rural vandals.”