He is the undisputed king of middle-of-the-road music. 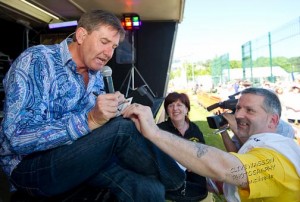 But even for Daniel O’Donnell, the price seems a tad ambitious.

The Pets In Distress charity have got their hands on one of Daniel’s waistcoats which they plan to auction.

The waistcoat was donated by the singer himself.

But not even he could have expected to see an opening asking bid of £5,000.

The bidding has been put on ebay in a bid to see how many Daniel fans around the globe are prepared to dig deep.

The accompanying advert for the auction says “Here we have an authentic waist coat, worn by the worldwide famous musician Daniel O’Donnell, which has been kindly donated, by him in person to the charity.

“Take this opportunity to own a piece of clothing belonging to this king of country music and friend to many.”

We’ll keep you posted if the bidding passes the €1 million mark!