A family’s pet dog had its throat slit and was stabbed up to five times during a frenzied attack. 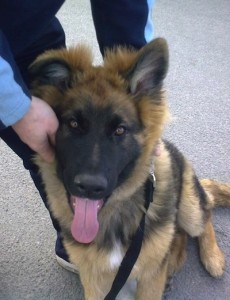 The two year old German Sheppard dog called Rex, pictured right in a family snap, was slashed from ear-to-ear in the unexplained attack which has left the community of St Johnston in shock.

Its owners now believe the dog may have tried to attack intruders when they broke into the shed.

The sick robbers attacked the dog so badly that there was blood on the walls of the shed after the attack.

The dog’s owner Trevor Peoples was too distraught to talk about the attack on his beloved pet at Ard Baitin.

However his angry sister Eva has hit out at those who carried out the brutal act.

She told the Shaun Doherty Show on Highland Radio “If they can do this to a defenceless dog then they can do it to a person too.

“Whoever did this to Rex is a danger to society and needs to be locked up.

“He was a quiet dog and never harmed anyone. All we can think of is that he frightened whoever got into the shed and they killed him,” she said.

No knife or implement used to carry out the savage attack was found.

Neighbours later told the Peoples family that they heard the cries of a dog throughout the night but they didn’t realise what had happened.

Eva revealed a lock on the shed was broken off before the attackers got into the shed.

All the shed contained was coal and Rex’s dog food.

The attack has had an even more damaging affect on the Peoples family following the recent death of their mother.

Sheila Peoples was just 50 when she passed away from cervical cancer just six weeks ago.

Another sister Kathy said they are still grieving for their mother and this attack has completely destroyed them.

“We are still trying to come to terms with the loss of our mother and now this happens.

“Why would anybody want to do this to a poor animal. We just can’t figure it out.

“He was a lovely big dog. My daughter Yasmin is only two but she loved playing with Rex and he was always gentle with her.

“All she keeps saying now is that Rex is in heaven with granny. It’s just heartbreaking,” she said.

Rex was taken to the vet immediately after the attack but he was already dead.

The family have contacted the Gardai about the brutal attack which took place in the early hours of Saturday morning last.

Gardai have confirmed they are investigating the incident.

Local dog owner Mickey Ford of Donegal Pets In Distress has offered a €500 for information leading to the prosecution of those who killed Rex.

“It’s the most awful thing I have heard. That someone used a knife or whatever to kill a dog is hard to take in.

“These people need to be caught so they cannot do something like this again,” he said.