EUNAN HAS GUINNESS RECORD IN THE (PUNCH) BAG!

Well-known Ballybofey boxer Eunan Devenney has officially punched himself into the Guinness Book of Records. 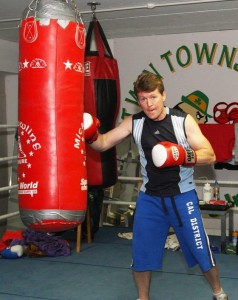 He had to hit the punch bag every two seconds to qualify for the exhausting record attempt.

He hit the bag so hard for so long that his two big toenails fell off!

HSE worker Eunan, 44, said he was delighted to finally get his certificate.

As well as being an avid boxer himself, Eunan gives huge amounts of his own time to coach many young boxers at Town Towns Boxing Club.