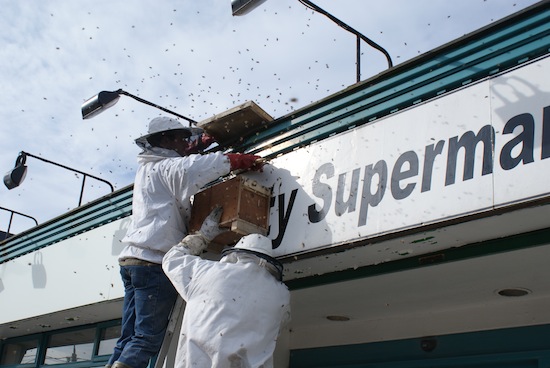 Shoppers couldn’t BEE-lieve their eyes when a swarm of honey bees gathered outside a busy supermarket.

An estimated 40,000 of the Black Irish honey bees decided to make their home outside Lafferty’s Supermarket in the village of Creeslough.

The shop, which is normally buzzing, was left almost empty for more than four hours before help was called to get rid of the bees.

Danny Martin Lafferty, owner of Lafferty’s Supermarket, said the bees definitely took the sting out of his afternoon trade! 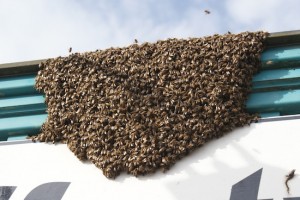 “I looked outside and I could see people waving their arms outside. It looked like it was snowing for a while.

“Then I looked closer and I could see this cloud of bees. Needless to say a lot of people were afraid to come near the shop for the afternoon while they were here,” he said.

Nobody knows why the bees chose the entrance above the supermarket to gather but amazingly not one person was stung.

Danny called a local bee-keeper who arrived with the necessary equipment to get rid of the swarm.

The man managed to sweep the Queen Bee into a holding box before transporting it away.

The bee-keeper, who asked not to be named, said he gets dozens of calls from people asking him to remove wasps and other insects each summer. 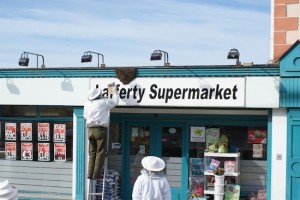 “I’m a bee-keeper and I would only remove honey bees. There must be up to 40 different types of bees and wasps.

“If people come across wasps or other insects then they would be better calling a pest control company.

“There is still a perception out that that bees sting but it rarely happens. Most bees are so full of honey that they wouldn’t have the energy to muster a sting,” he said.

Meanwhile supermarket owner Danny Martin Lafferty said the only visible remains of the unBEElieavable drama were a few trampled creatures. 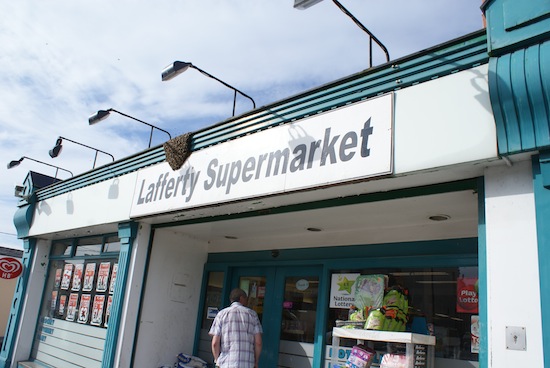