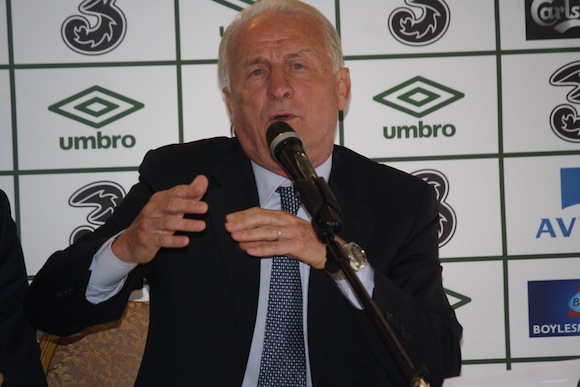 Ireland manager Giovanni Trapattoni has dropped Shay Given from his squad.

But another Donegal man is included – Everton’s Seamus Coleman – for an upcoming friendly.

It doesn’t mean however that Villa keeper Shay won’t return for the World Cup campaign.

Trap was speaking in Ballybofey where the FAI is holding its annual meeting this week.

Announcing the teams he will use for next month’s friendly against Serbia, he said he will explore his options after resting a number of his more established players and bringing in those on the fringes when he named his squad this afternoon.

Also dropped are Robbie Keane, Damien Duff, Richard Dunne and Keith Andrews all make way with the likes of James McCarthy, Keith Treacy, Seamus Coleman and Marc Wilson coming back into the picture.

Trapattoni said: “This friendly offers us a great opportunity to try out younger players ahead of our World Cup qualifying campaign.

“As a result, I have decided to leave some of our senior players out of the squad for this fixture.

“Serbia are a very good team with a great football heritage, and will provide us with a great test before our game against Kazakhstan in September.”

Trapattoni had informed his senior men in advance that they would not be involved.

He added: “I am looking forward to working with these players…..as we prepare for a new journey for this team, it is important that we remember our last campaign as we build for a brighter future.”
Republic of Ireland squad v Serbia: Westwood, Forde, Randolph; Wilson, O’Shea, St Ledger, O’Dea, Ward, Kelly, McShane; Whelan, Gibson, McCarthy, Green, Coleman, McGeady, Keogh, McClean, Treacy; Doyle, Long, Cox, Walters.