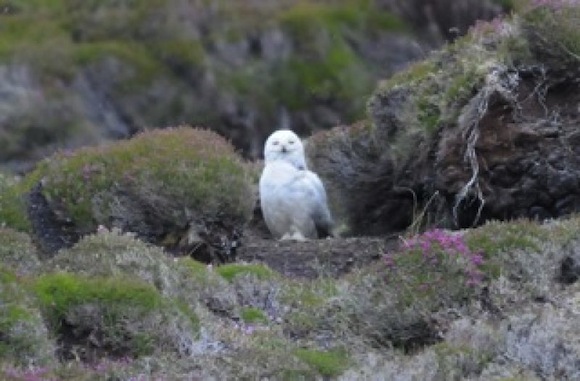 A MALE snowy owl has made Arranmore Island its home – in a rare sighting for a bird more at home in Iceland.

The bird was first seen on Wednesday, but was still present today.

Ornithologists from north and south of the Border are travelling to the island today hoping to see the owl.

Similar sightings on Arranmore in 1993 and on Tory on 2010 had twitchers all in a flap!

The Snowy Owl is an extremely rare bird in Ireland and this is the 13th confirmed record but only the third in the last 50 years.

A rare snowy owl has birdwatchers flocking from across the country to a remote island off the coast of Co Donegal.

The bird was spotted in recent days on Arranmore Island and is believed to have come from either Greenland or Iceland.

Dick Coombes of Birdwatch Ireland, said there is no way to know how long the bird will stay on the island for.

He warned about the difficulty is posting the bird despite the fact that it is almost as large as a sheep and almost completely white.

“Arranmore is a large island and the bird could easily bend into the area.

“I know first hand how difficult it is as I tried to spot a Snowy Owl on Arranmore a number of years ago. Various rocks and even polythene bags could be mistaken for the bird,” he said.

One person who has been lucky enough to have watched the bird for more than 30 minutes is Gerry Griffin.

Mr Griffin, who is from Co Clare, but has a holiday home on the Donegal island, even managed to get a couple of its feathers.

“At first I thought it was a sheep and then I noticed it moving and realised it was a snowy owl.

“I watched it for more than half an hour and it was fantastic. I even managed to get a couple of its feathers from where it was roosting and I have put them in a frame,” he revealed.

Mr Griffin spotted the bird in an area known as the Twin Lakes on Saturday last.

The bird is understood to be a young male, perhaps between two and three years old and still has some black patches because it is not fully matured.

Dick Coombes of Birdwatch Ireland says the owl, which is rare because it hunts during daylight hours, will survive on rabbits.

He reveled there has only ever been one recorded attempt by snowy owls to breathe in Ireland and that was also in the hills of Co Donegal more than a decade ago.

“In coming to Ireland these birds are at the very edge of their range – they much prefer places like Greenland and Canada closer to the Arctic Circle.

“There is another snowy owl which regularly visits Belmullet. It would be fantastic if it mated with the Donegal owl but it is unlikely,” he said.

* This picture was taken by Mike Glynn.