It was the murder of a young Co Donegal mum and her two daughters that shocked the nation. 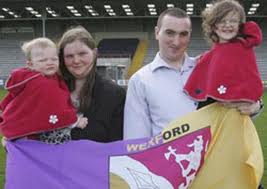 It is more than five years since the deaths of Burt woman Ciara O’Brien and her two daughters at the hands of her husband Adrian Dunne.

Now a television documentary is to show how the main safeguard recommendations following the murder/suicide have not been followed.

Tonight’s episode of Scannal on TG4 reflects on the days building up to April 23rd, 2007, when the bodies of the Dunne family were discovered in their home in Monageer, Co Wexford.

Questions as to whether more could have been done by authorities to prevent the deaths of the family, who were well-known to the social services and the HSE, still remain.

Chillingly, just days before the tragedy, Adrian and his wife made arrangements for all their funerals including daughters Shania, 5, and Leanne, 3.

The tragic mother and her two daughters were buried in Burt Cemetary – more than 250 miles from Adrian Dunne who was buried in Wexford.

But despite the alarm being raised by the local undertaker, the subsequent actions of the gardaí, a parish priest and health authorities were not enough to prevent the tragedy.

In the programme, former assistant commissioner Martin Donnellan insists local gardaí, who had driven by the family home a number of times in the days before the murder/suicide, had no reason to believe a tragedy was about to occur.

However, Mr Donnellan did concede his regret that a patrol unit, which had driven by the Dunne house just two days before the bodies were discovered, did not enter the family home.

He said: “The only one thing they didn’t do, I suppose, was maybe call to the house and make some excuse for calling there just to see if everything was normal or as it should be.”

However, the biggest failing was the fact there was no out-of-hours social service to intervene — meaning calls to care teams went unanswered until it was too late because t no one was on duty.

Another contributor, Siobhan de Barra, a lecturer in psychology, warned that other families remain just as vulnerable because there is still no 24/7 social services care.   She added: “I guarantee that if an out-of-hours service was available, it would be used regularly.”

REPORT DID NOT FOLLOW UP ON DEATHS OF DONEGAL MOTHER AND DAUGHTERS was last modified: July 24th, 2012 by Stephen Maguire
Facebook0Tweet0LinkedIn0Print0
Tags:
Adrian DunneBURTCIARA O'BRIENDEATHSMONAGEERWexford