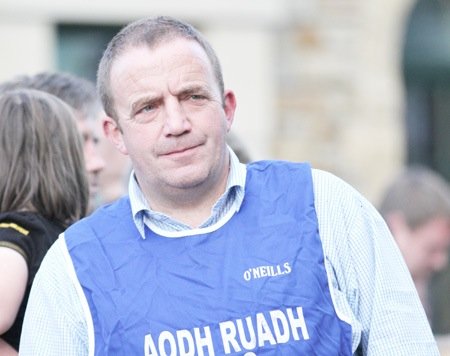 The death occurred last Friday of Coleman Kerr, a much-loved member of the Aodh Ruadh GAA club in Ballyshannon.

He was laid to rest on Sunday after Requiem Mass at St Patrick’s Church.

The following wonderful tribute on the club’s website was sent to donegaldaily.com today. Here we share it with you:

“Clubs are more than pitches and teams. A club is a community, it survives and prospers through the commitment of people. Aodh Ruadh has been fortunate to have the dedicated service of many. Last Thursday the club lost one of its most committed, dedicated and popular servants.

Colman was a Portsalon man and proud of it, he played for Fanad Gaels, captaining them to a junior championship title against MacCumhaill’s 1985. In his time he also played soccer with Kerrykeel. Work took him to Ballyshannon with ESB Salmara in 1992 and, latterly, ESB Fisheries.

Portsalon’s loss was Ballyshannon’s gain. Never the hurler on the ditch, Colman committed himself to the town with what was to prove characteristic dedication. He was very active in Aodh Ruadh. Colman was one of the big men of the club both in physique and persona. He played reserve and third team football, winning division four titles in 2007 and 2008 and a Junior B title in 2004, in fact he was also a selector on the championship winning team and for a number of years thereafter. Hardy and robust, he had startling skill for a tall man. Gifted with a great fetch and an eye for the dixie he was too much to handle for many a ruffled defence. As his friends and comrades gathered at his wake he was particularly remembered for his performance in the 2004 semi-final. Kilcar were tough opposition, but Colman simply blew them away with a reel of points from his cultured left boot, each one more sumptuous than the next.

He was under no illusions about his talents either. He had a big voice to match his big personality and often during a match he could be seen standing with the arms spread wide apart roaring at his defence to, “Let the ball in,” when he knew he had the roasting of his man.

Latterly we would hear his distinctive voice booming across the park, encouraging players. If ever he took issue with an official it was always with humour, malice was alien to Colman. Indeed it was one of the distinctive things about Colman that any new face that came about the club was immediately took under the wing and firmly embraced into the Aodh Ruadh fold.

Nevertheless even Colman’s powers of diplomacy were hard tried when he found himself in a tricky spot in 2010. Fate saw Aodh Ruadh meet Fanad Gaels in a division two relegation play-off. Unsurprisingly he revelled in the banter, mixing with both teams, joking, chatting, recalling past games and players. He solved the problem of his divided loyalties by wearing a Fanad Gaels shirt, topped by an Aodh Ruadh jacket.

A sporting ecumenist his Fanad soccer heritage served him well in his outings with Erne Wanderers. More recently he became heavily involved with the Marlins Swimming Club, and even found time to cast the odd line or two. Beyond the sporting sphere he was part of a progressive Rockfield School Board.

A natural leader it wasn’t long before he was the other side of the chalk for Aodh Ruadh, taking underage teams. The under 10s, 12s and 14s, often featuring his son, Oisín, benefited from his guidance. More recently the ladies were the focus of his coaching efforts, especially the under 16 girls, a highly promising team which his daughter, Cliodhna, is a key part of.

Colman could always be relied on to pitch in whenever hands were needed to the pump at a fund-raiser. He was a regular feature at the annual Ladies Duck Race. As a keen quizzer he made a bravura appearance at the club’s Who Wants To Be A Thousandaire, bagging €500, and he seldom missed the Thursday quiz in Owen Roe’s, especially when Aodh Ruadh were the beneficiary. How many hours must he have put in at the Aodh Ruadh lotto table in the Saimer Court of a Saturday? Bank Holiday Monday, the day after he had been in Croke Park to see Donegal defeat Kerry, Colman was on the bridge in Ballyshannon with a bucket collecting for the senior Donegal Ladies. Working for the wider community to the very end.

When the end did come it was swift and cruelly unheralded. Due to help take a training session with the under 16 girls team, he failed to turn up. His daughter Cliodhna, like the rest of the team, waited for Colman to arrive, but he never did. The gentle giant was being sped to his eternal and richly earned reward.

As the news of his tragic passing spread across the area, it was greeted with disbelief and shock. It seemed as if this rock of a man had met practically everyone in the last week of his life, in Croke Park with his family at the All-Ireland quarter-final, in town afterwards, at the park or saluting his many friends going about his business. Few could believe what they were hearing, and, in truth, many of us still struggle to believe it is real. Perhaps, it will only be in the coming months when we reach out for that helping hand that Colman would have so willingly offered, only to realise that it is no longer there, that the loss will finally hit home. We will all be remembering Colman in quiet moments for a long time to come. And there will be tribute in that.

And yet Aodh Ruadh’s loss, stands as insignificant against that of the Kerr family. Colman’s loving wife Deirdre, children Cliodhna and Oisín, the Donagher clan who welcomed him as one of their own, his mother, Susan and his brother and sisters in Portsalon. We can only keep them in our thoughts and prayers at this time as they try to come to terms with this grievous and incomprehensible loss.

As Colman was laid to rest, his remains were accompanied by honour guards from Aodh Ruadh CLG, Fanad Gaels CLG, Kerrykeel Soccer Club, Marlins Swimming Club and ESB. The last to honour guard for Colman was his under 16 ladies squad, who guided him to the church, a church crammed to overflowing with family, relations, work mates and friends.

Close to 1,000 attended his funeral mass, a mark of the profound and positive impact Colman made on so many lives. His time with us enriched us all and we will all be the poorer for his passing at a time when he had so much yet to give.

The club extends their sincerest sympathy to Colman’s family and friends. We will all miss this great hearted man.