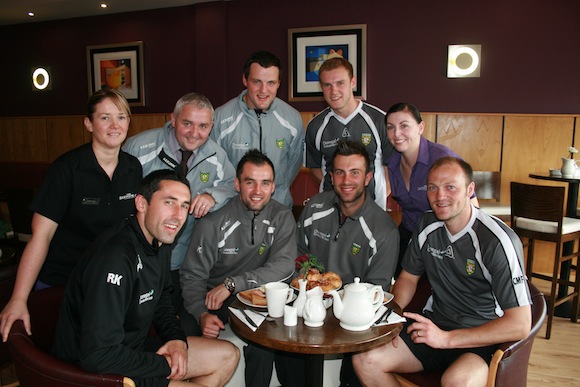 COUNTDOWN TO CROKER – CAPTAIN MURPHY HOPING MAYO DAD WILL BE BEHIND DONEGAL!

DONEGAL captain Michael Murphy has admitted there was huge cheering in his house when Mayo beat Dublin – because his dad is a Mayo native.

But he thinks his dad will be backing him and Donegal in the All-Ireland final – although he’ll be a winner either way.

“It was good fun, alright,” he told the Press Night in Ballybofey.

“And I suppose with the father being from Mayo, and many of the relations being from down there too, there was loud shouting for Mayo on the day. But once the final whistle went I had to rush over and turn the green and gold towards the father.”

Michael’s dad Mick, a retired Garda, is a Glenswilly stalwart.

“There’s myself playing and having coached some of the other players on the team here at the moment, I suppose whatever way it goes he’ll come out a winner,” said the Donegal captain.

“I don’t like to speak on his behalf, but I’d say he’ll be supporting Donegal. I hope he will!”

The student says he wants fans to enjoy the build-up and the game; and the players are trying to mix their focus with enjoying the excitement as well.

“It’s really trying to find a happy medium,” he said.

“We’re trying not to get too caught up in all the hype, and at the same time I don’t think it’s right to cocoon yourself totally away from it – I wouldn’t think that would be healthy either.

“So it’s just really trying to find a happy medium where you can go down the street and chat to people about it, and at the same time really focus on the job at hand.

“I suppose it’s a difficult thing to try and strike all the time, but I think it’s important that we try and find it most of the time and find your own wee corner and own wee space to keep focused on the job at hand, as they say.”

He also dismissed suggestions that Donegal are anywhere near the complete team, insisting Donegal will have to play better than they did against Cork to beat Mayo

“I suppose like in the Kerry game in the quarter-final, too, the concession of late goal really had the backs to the walls for us and it’s something we’re not happy with,” he said.

“That’s something that we’re really going to have to look at on the training ground in the lead-in to the game because we know that the performance we put in against Cork wouldn’t be good enough to overcome this Mayo side.”