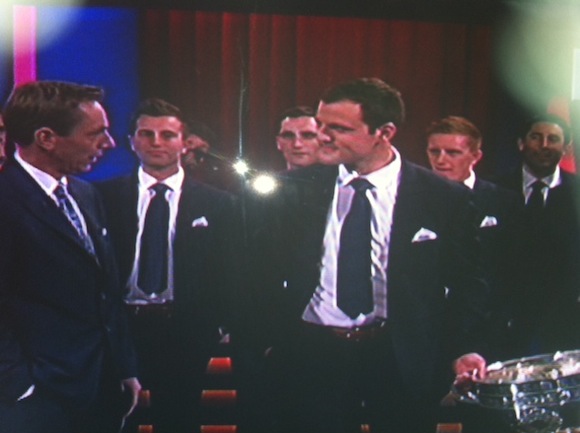 JIM McGUINNESS and the Donegal team certainly weren’t complaining but fans certainly were after RTE was accused of bias towards Dublin last night.

The Donegal heroes were guests on the Late Late Show as All-Ireland winners.

But the contrast between how the victorious Dublin team was treated last year compared to Donegal team this year could not have been more stark.

Host Ryan Tubridy interviewed Jim and captain Michael Murphy on the main floor of the studio, with the rest of the players standing behind them.

But last year when Dublin won the All-Ireland, the Late Late Show set aside more than 14 minutes.

Back then the team manager, his captain and two other players were invited to a full sit-down interview.

They even showed highlights from the Dubs’ final win over Kerry.

We understand that no-one in the Donegal camp was complaining – they enjoyed the shorter interview and mingling with other guests before and after the show.

But as one Donegal Daily reader put it: “It just shows once again the bias at RTE towards the capital.

“We waited 20 years to win Sam again and it deserved just five minutes. I don’t think anyone at RTE could explain that.”