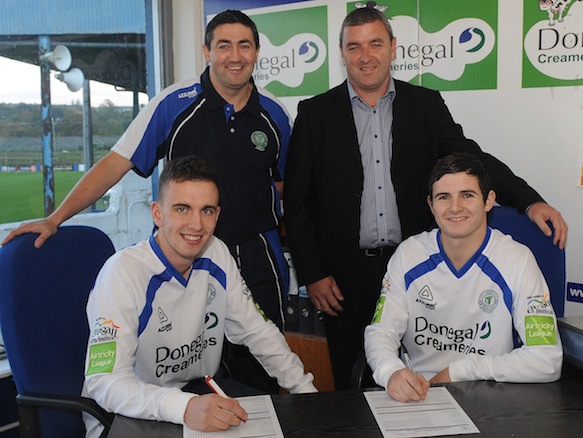 Finn Harps have been given the perfect end to the season after Ciaran Coll and Paul McVeigh have signed new contracts with the club as manager Peter Hutton begins planning for the 2013 campaign.

At just 21, Ciaran Coll is now considered one of the more experienced members of the first team having made his Harps debut in March 2009 in a 1-1 draw away to Kildare County, and has already clocked up 84 appearances for the club.

The St Johnston native has penned a two year deal with the club and is looking forward to building on his recent excellent form.

“I am delighted to be committing myself to Harps for the next two years. I believe we are improving all the time and there is no reason why we can’t be challenging for promotion next year. My family have always been huge Harps supporters so it’s great to get my future at Finn Park sorted out”

Fanad man Paul McVeigh who has signed a one year deal believes he can continue to improve his game.

“It was a big step up to senior football but I would like to think I grasped the opportunity when it came along. I am going to keep my head down and keep working hard and hopefully I can go on to make a lot more appearances and score more goals for Harps”

“I am pleased that Ciaran has signed for another two years with us because I regard him as the best left back in the league. He looks after himself, is a great professional and has been a model of consistency this season,” he said

The Harps manager feels McVeigh earned a contract following a promising debut season in which he has scored five goals in fifteen appearances. “Paul made an immediate impression on his debut in the Brandywell and has been a breath of fresh air around the club. He is naturally athletic and his energetic approach has been causing defences a lot of problems this season. Paul has a lot to learn but if continues to display the same professional attitude we will work with him so he can fulfil his huge potential” he added.