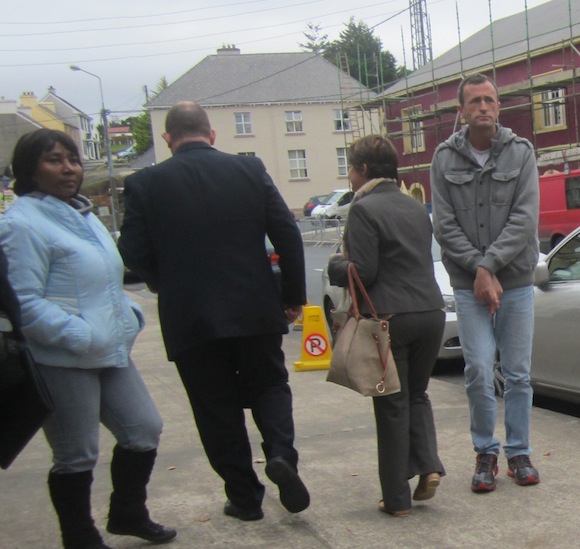 Gardai raided a brothel and were answered at the front door by a man wearing women’s underwear and a blonde wig.

The raid took place at Ballymacool Terrace in Letterkenny on Monday night last.

Two foreign nationals (pictured on extreme left and extreme right), one a woman from Spain and a man from Brazil, appeared at a special sitting Glenties District Court this afternoon.

Gardai described how they found Jose Filho, 44, dressed in women’s underwear and wearing a wig at a suspected brothel.

He had just had sex with a male client who was also still on the premises when Gardai raided the terraced house.

Solicitor Patsy Gallagher said that both Filho and Flor Yeni Montano Hurtado, a 42-year-old Spanish national who arrived in Ireland just four weeks ago, had been trafficked into prostitution by brothel bosses in Dublin.

Both of his clients pleaded guilty to prostitution charges.

“My clients are victims in this incident. The victims are these unfortunate people themselves. I respectfully submit that the law has to be changed or otherwise the human rights of people like this are going to violated over and over again.

“Currently under the law no-one observed by Gardai on these premises over a period of time have committed an offence and the law has to be changed to make an offence,” said Mr Gallagher.

He said they were the latest “poor people from all over the world arrive in Dublin looking to better themselves and end up being forced into prostitution.”

The woman came here to earn money to send her two children to college and had ended up working for a massage parlour.

Both had been ordered to pay €250 to use the Letterkenny premises which was in the heart of a residential area of the Co Donegal town.

The court heard that Mr Filo he is a very vulnerable individual who has no English and said through his interpreter that he is suffering from HIV and wants to return to Brazil as soon as possible.

Detective Sgt John Murphy told the court that the house at 9 Ballymacool Terrace had been under observation for a number of weeks.

A number of men who had frequented the premises had been questioned and one man was detained there.

“Mr Filo had answered the front door of the premises. He was dressed in women’s underwear, was wearing a wig and was wearing make-up,” he said.

Ms Hurtado was dressed in just her underwear in the kitchen of the premises.

Mr Gallagher told the hearing that the Spanish national, who had suffered from the side effects of a stroke, had a return ticket to Spain and planned to leave Ireland this Sunday.

Mr Filho had a ticket to return to Brazil on November 27.

Judge Paul Kelly released them both having signed a bond to keep the peace.

Mr Gallagher added that the law must be changed to protest trafficked people being led into prostitution.