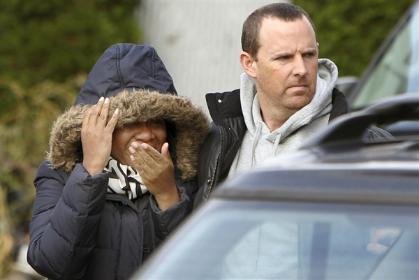 A Donegal father has been left devastated after his two young sons were swept to their deaths during Hurricane Sandy in America.

Portnoo native Damien Moore, 39, is still coming to terms with the loss of sons Conor, 4, and Brendan, 2.

The boys were swept from their mother Glenda’s arms when the huge storm hit their home in New York’s Staten Island.

Damien, pictured with Glenda at the scene, was at work with the city council when the tragedy occurred.

Glenda decided to get into the couple’s Ford Pickup truck when the storm hit but this was hit by a gust of wind and rising water.

She managed to wade her way through the street but was hit by another swathe of water which washed her two sons away.

The boys were found just 20 yards apart on Thursday last, days after they became separated from their heartbroken mother on Monday.

Local priest, Fr Philip Daly has been comforting Damien’s parents, Paddy and Fay, who retired back to live in Loughfad after spending a large part of their life in the US.

He said “It is a terrible tragedy and our thoughts and prayers are with the family at this tragic time,” he said.

“Damien was born here in Portnoo but emigrated young in life and married Glenda. She was on her way in a blue Ford pick-up to her mother’s home in Brooklyn when the tragedy hit,”

“Damien works for the city council in New York, but over the years always kept up contact with the area and visited his parents here at Loughfad. The news has come as a huge shock to locals in this area.

“The Moores are a long established family in the Portnoo-Kilclooney area. They have many cousins who reside here and relations are comforting Paddy and Fay at this difficult time for the family. Damien would have attended the local national school at Ballykillduff before he went to make his way in the world,” he said. 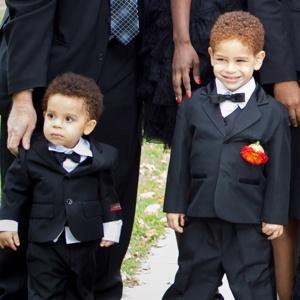 “Glenda was concerned because there was no electricity in the house and she had two young boys. However, she said to Damien she would stay at home until he got back,” Fr Daly said.

“It appears Glenda’s mother called and told her and the kids to come to her home on higher ground. Glenda was making her way in her Ford pick-up vehicle to the mother’s house when tragedy struck. Her pick-up was knocked over by a huge gust of wind. They were up to their waist in water in the submerged pick-up,”

“Glenda, grabbed the two boys and started to wade her way to safety along the roadside but the next thing she was hit by another gust and knocked over. She lost the grasp of the two young boys who were swept away,” Fr Daly explained.

Glenda sat sobbing on the roadside through the rain-lashed night for up to 12 hours until she was spotted by a patrol car and told them of her tragedy.

Despite her ordeal, the brave mother joined the search for her boys until their bodies by officers who had used heat-seeking equipment to search marshes.

On Friday night, the names of the two boys were read out as part of a remembrance which is held every year on the Feast of All Souls.

Fr Daly, also confirmed the family are hoping to arrange a remembrance in St Conal’s Church, Kilclooney on the day of the funeral in New York which is still being arranged.