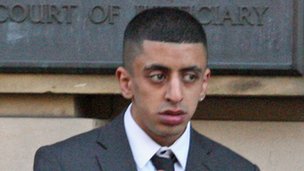 A teenager who refused to co-operate fully during a high-profile murder trial has been jailed for 15 months.

Umar Bhatti, 19, was found to be in contempt of court after giving evidence in the trial of his cousin Adel, Ishaq, 19 and 20-year-old Asif Rehman.

Both men face life sentences after being convicted of murdering 57-year-old Irishman William McKeeney in Pollokshields, Glasgow, on 15 January.

Bhatti was found to have intentionally sought to mislead the trial last month.

During the trial, at the High Court in Kilmarnock, Bhatti was warned by judge Lord Uist, then found to be in contempt of court.

Bhatti, from Pollokshields, further angered the judge by claiming that his statements to police in the aftermath of Mr McKeeney’s death were true – then later telling a social worker that they were fabricated.

Imposing a sentence of detention, Lord Uist told Bhatti: “You deliberately prevaricated by withholding from the court evidence you were well able to give and intentionally seeking to mislead the court.

“It is clear from your previous convictions that you have embarked on a criminal career since your youth and you have no regard for the law.”

Lord Uist said Bhatti’s behaviour in court was an example of his contemptuous attitude.

During the trial, the jury was told that Mr McKeeney was attacked by Ishaq and Rehman while making his way home from a nearby pub.

His partner Annemarie Newlands, 48, saw the attack but did not realise it was Mr McKeeney.

She went outside afterwards to find him “very battered” with the side of his face “all swollen”.

The 57-year-old, who was originally from Malin Head in Donegal, Ireland, died later in hospital.

JAIL FOR MAN WHO MISLED COURT DURING TRIAL OF MEN WHO KILLED MALIN HEAD MAN was last modified: November 9th, 2012 by Brenda

Tags:
JAIL FOR MAN WHO MISLED COURT DURING TRIAL OF MEN WHO KILLED MALIN HEAD MAN