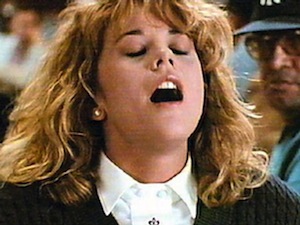 ONE local wag has used lines from the hit Hollywood movie ‘When Harry Met Sally’ to insist that Donegal would vote Yes in certain circumstances.

Commenting on an opinion column reflecting on Donegal’s No vote in the Children’s referendum, the Ballyraine Park man tells the paper’s editor what he thinks.

He said the column “neatly encapsulates the background to recent referendum votes in Donegal.”

The he added with a killer blow: “However, were the government to offer referenda on the abolition of the Seanad, substantial reductions in the numbers and perks of TDs and a slashing of the salaries of directors and senior managers of State-owned banks, I have no doubt that Donegal would echo the immortal words of Meg Ryan: “Yes, Yes, Yes”.

For the very few of you who’ve never seen the scene referred to (and for those who want to see it again) you can see it here: