MASTERMIND WINNER JACK HAS GREAT FUN WITH LACK OF ‘DIRECTION’!

Ireland’s brainiest kid has been teased at school – because he wasn’t sure who One Direction star Niall Horan was. 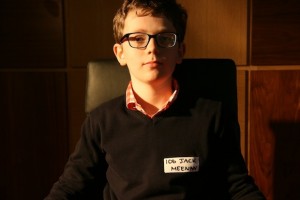 Clever Jack Meenan, 11, from Castlefin this week won TV3’s Junior Mastermind title after beating hundreds of children across the country.

But the Co Donegal schoolboy did slip up on one question about the world’s biggest boyband.

Jack was asked which band Niall Horan was a member of?

The sixth class pupil for once got it wrong and answered The Wanted.

Now Jack’s schoolmates have had a rare chance to give him some good-natured ribbing.

“I know who he is – who doesn’t? I just wasn’t sure about the band he was in,” laughed Jack from St Mary’s National School.

“It’s not often Jack gets a question wrong and the craic has been great that he didn’t know what band Niall Horan was in.

“It’s all been good natured but they have been having great fun pointing out his mistake.

“The school and his classmates have been great to Jack. They have watched the show a few times and they are delighted by his win,” said mum Edel.

Jack wants to become a computer games designer when he gets older and even work for Apple – if he doesn’t get chosen to play for Arsenal Football Club.