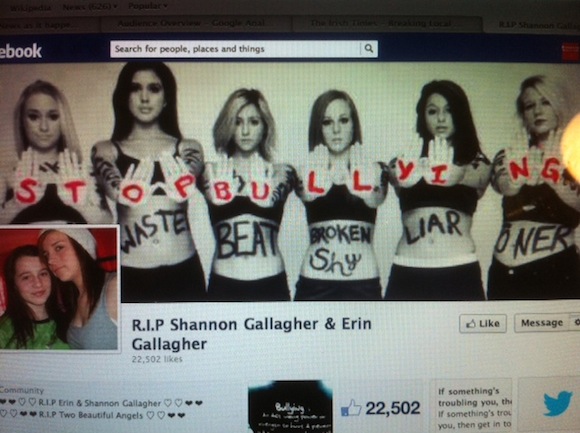 A leading Donegal internet expert has questioned the trend of setting up on-line memorial Facebook pages following a tragic death.

Four such Facebook pages have been set up in tribute of Shannon Gallagher who took her own life on Wednesday.

One of the Facebook pages ‘RIP Shannon Gallagher and Erin Gallagher’ had almost 25,000 ‘likes’ last night after being set up just yesterday morning.

“In the wake of recent suicides in Ireland, we have seen an unprecedented amount of activity on Facebook after the bully victim has taken their own life.

“RIP Facebook Memorial Pages are souvenirs for people who either know the victim well or have not met the deceased but are compassionate to the surroundings of the case.

“But is it more to do with the situation or the person who passed? For the people that have no idea who the victim was, will comment on how “Heaven took an angel too early” because of their age and maybe less on fact how they would of known them. It’s human nature, we don’t need to know the family of a bereaved one to sympathise. We try to extend our kind thoughts and prayers, as we don’t know what else we can do.

“It has been part of Irish society for decades, maybe centuries and it’s no different now but how we express these emotions are changing. We now have Social Media to increase our reach to more people,” he said.

Niall adds that many comments are sympathetic but others turn nasty.

“The bulk of the messages on these sites are expressing concerns over the tragedy, whilst other people are just being curious to what happened, by asking lots of details of the death. With this, people also have the ability to put their 10 pence worth in. On one such Facebook page, comments such as “Online Hoe” were describe about the person who died.

“Also, comments that would personally attack victims “I couldn’t dislike her ugly face ..:3” These people are not comforting with others when putting up these comments. They are looking for attention maybe out of an already delicate tragedy,” he said.