Donegal All-Star Mark McHugh is a major doubt for the start of Donegal’s National League campaign with a pelvis injury. 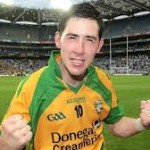 The Kilcar man (22) has not taken part in any field sessions since Jim McGuinness’s side claimed the county’s second All-Ireland title in September because of osteitis pubis, an inflammation of the pelvis experienced by many elite sportsmen.

McHugh joins Karl Lacey on the injured list after the Four Masters man was ruled out for three months with a hip operation.

McHugh remained on the sidelines for his college side IT Sligo’s entire FBD Connacht League campaign.

However, he said that he still retains hope of featuring for Donegal in the coming weeks.

“I am not 100 per cent sure yet, but I am giving myself every chance. I have to just listen to what my doctors and physios say,” said McHugh.