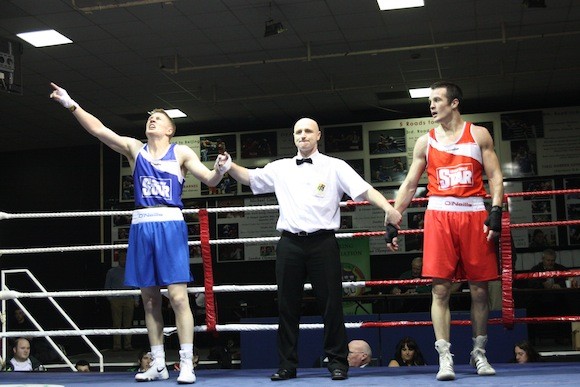 Jason Quigley takes the victory as Olympian O’Neill looks on

London 2012 Olympian and defending middleweight champion Darren O’Neill is out of the IABA Elite Championships after dropping a countback decision to Finn Valley’s Jason Quigley on Saturday night.

Both boxers were tied at 13-13 at the end of a cracking 75kg quarter-final, but Quigley’s hand was raised in victory on accepted scores (49-38).

The current European U/23 champion took the first two rounds to lead 9-7 going in the third, but O’Neill, who beat Quigley in the 2010 and 2011 Elite finals, claimed the final frame 6-4 before losing out on a countback.

Ursu, to his credit, shared the last round 6-6 with the Bray BC southpaw, but Nolan held a 14-4 advantage going into that stanza.

Beijing 2008 Olympian John Joe Joyce turned on the style in the final three minutes to secure victory over Steven Donnelly, while Conrad Cummings beat Christy Joyce by a seven-point margin.