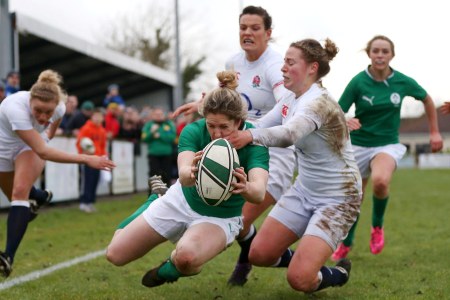 WOMEN’S RUGBY: TWO of Donegal’s up and coming sports women are the toast of the nation after helping Ireland to an astonishing 25-0 whitewash of England in the Women’s Six Nations rugby tournament on Saturday.

Both Ballybofey player Larissa Muldoon and Nora Stapleton from Fahan started the game against the seven-time defending RBS 6 Nations champions.

Alison Miller scored a hat-trick of tries as Ireland stunned the favourites in Meath.

In the first match in which England Women have failed to score since 2004, Miller proved the difference between the two sides as Ireland chalked up a first ever win over last year’s Grand Slam winners.

Full-back Niamh Briggs scored the rest of the points to hand Ireland a second successive win, having prevailed late on last weekend against Wales.

England were outclassed and despite a late rally, they could not trouble the scorers.

Ireland took a deserved lead in the seventh minute when Miller dived over in the corner and that advantage became eight soon after when Briggs converted a penalty.

With 27 minutes on the clock, Miller again proved elusive for England, who had beaten Scotland 76-0 last time out, and she had her second try of the match again in the corner.

And winger Miller completed her hat-trick before the interval as concerted pressure released the Munster flyer – Briggs adding the extras for a 20-0 lead.

After the break, it was more of the same for the hosts and it was Briggs’ turn to cross the whitewash after 45 minutes.

England did their utmost to build momentum but they couldn’t keep Ireland at bay and only some fine defence from the visitors restricted their hosts from adding to the scoreboard.

And things got worse for England when wing Fiona Pocock, making just her second appearance since 2010, was forced off on a stretcher in the closing stages of the match.