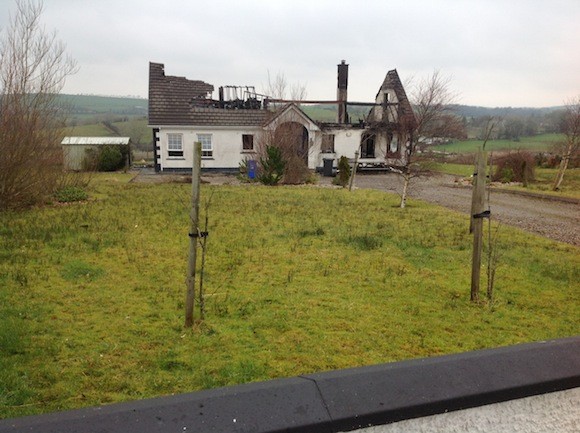 EXCLUSIVE: The Donegal home at the centre of the recent uproar over Traveller accommodation was NOT bought by Donegal County Council before the attack.

Donegal Daily can reveal the owner of the Ballyshannon house did not sign the house over to the council before it was burned to the ground.

The woman was due to sign the paperwork on the sale of the €230,000 house at Parkhill on February 11th.

But just hours before the deal was done, the house was gutted in an arson attack just after 3am which Gardai are now investigating.

Donegal County Council has now received legal advice that the sale had not been completed before the fire took place.

The issue was discussed at a Corporate Policy Meeting of Donegal County Council yesterday.

Members of the Corporate Policy Committee, which includes Mayor Frank McBrearty as well as councillors Ciaran Brogan, Dessie Larkin, John Campbell, Cora Harvey and Martin Harley, were told the council’s legal opinion was that the sale had not been completed.

Councillors were presented with information on the sale of the house as part of the overall Corporate Policy Meeting.

The documentation read “The contract for the acquisition of the dwelling was sealed by the council on 20th Dec 2012 and was signed by the vendor on the 12th Jan 2013 (the date of sale).

“Naturally, arising from the serious damage caused to the property, the vendor was not in a possession to deliver the property substantially in its condition as at the date of sale and as such, the sale has not been completed.”

Donegal Daily understands the owner of the gutted house, which had been allocated to a Traveller family of 12, has been informed of the situation.

It is understood she is now taking legal advice on the matter and is checking to see if the property was covered by insurance up to the time of the fire.

The Mayor of Donegal, Cllr Frank McBrearty, refused to make any comment on the situation when contacted by Donegal Daily late last night.

The move to buy the house for the Traveller family caused major controversy and debate across Donegal in recent days.

Cllr Sean McEniff found himself at the centre of the debate after he said that Travellers should be isolated form the settled community.

The fall-out from the debate has led protesters to picketing Cllr McEniff’s Camden Court Hotel in Dublin at the weekend.

He has accused his detractors of “hounding” him over the issue.

The latest development means the council is not out of pocket as a result of the blaze.