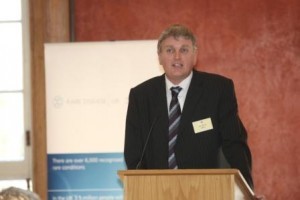 A DUP politician from the North today launched a scathing attack on wind farms – saying the people of Ireland don’t want them.

MLA Jim Wells was speaking at the meeting of the British-Irish Parliamentary Assembly which is in session at LYIT in Letterkenny today.

A number of executives from wind farm companies from Ireland and Britain have addressed parliamentarians from Ireland, Scotland, England, Wales, the Isle of Man and Jersey.

Having listened to the wind farm companies, Mr Wells described them as ‘monstrosities.’

He said the people of Ireland, north and south, don’t want them.

The Assembly member said they had destroyed the countryside in his South Down constituency.

He also said the idea there was no carbon footprint from wind farms was wrong because one was produced during their manufacture.

“There’s also a perception that because of opposition to wind farms in Britain, that the problem is being exported to Ireland,” said Mr Wells.

The Taoiseach Enda Kenny is due to address the 46th Plenary Session of the Assembly this afternoon.

There is a large Garda presence in and around Letterkenny today.

Protestors are due to arrive at the LYIT at 2.30pm.