A Donegal businessman who has been given 100 days to save his 100 year old business says his customers have given him a massive boost of confidence by spending more at his shops. 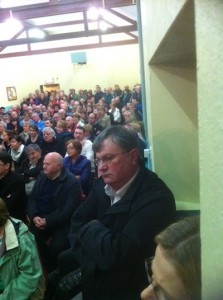 Mr Lafferty employs 40 people in the village which has a population of just 300.

Locals fear the closure of Mr Lafferty’s businesses – the Corncutter’s Rest Bar, the Vivo supermarket and the Shell Service station – will end the economic life of the village.

More than 500 people attended an emergency meeting of the village last Monday night to find ways of saving the businesses.

At the meeting, Mr Lafferty appealed to people to spend a few more euro at his businesses to save the 40 jobs.

Mr Lafferty has now confirmed that footfall at his shop is up and he is determined to remain open.

“It’s early days yet but we have noticed more customers coming into the shops and they are spending a few more euro.

“We are working to try and sort the creditors and suppliers and sort things out.

“I have said that if people spend an extra €20 or €30 locally each week then we will have a real chance of surviving and holding those 40 jobs.

“We still have a long way to go but the meeting last Monday night showed the huge amount of goodwill that is there for us.

“We have won the first battle but this is a war and we have a lot of battles still to win,” he said.

Mr Lafferty will go before the High Court in May to prove that his business is still a viable venture and he can pay back suppliers and operate a profit.

BUSINESSMAN SAYS CUSTOMERS HAVE GIVEN HIM HUGE BOOST TO SAVE HIS SHOPS was last modified: March 7th, 2013 by Stephen Maguire
Facebook0Tweet0LinkedIn0Print0
Tags:
businessesCreesloughDanny Lafferty