PADDYS AND PATRICIAS GO CLOSE BUT NO WORLD RECORD!

It might be the most popular name in Ireland but there wasn’t enough Paddys or Patricias to set a new world record in Co Donegal today. 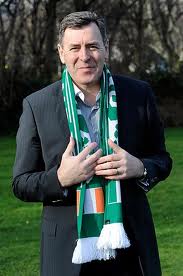 Was Packie at the Finn Valley centre today?

The Twins Towns of Ballybofey and Stranorlar was the setting for an attempt to break the world record for the most number of people with the same name in the same place at the same time!

Other versions of the name Paddy including Pauric, Pat and Patricia were accepted as hundreds queued up at the Finn Valley Centre in Stranorlar from 4.30pm onwards.

In the end, however, organisers managed close to 800 Paddys and Patricias.

Organiser Kathy Taaffe said she was proud of the attempt but the cold weather may have played a part in keeping people away.

“It was a bitterly cold day but we really did come so close. It was no mean feat getting almost 800 people with the name Paddy, Patricia or Patsy.

“There was a great atmosphere here and everyone really got into the fun of things but we just didn’t have the number in the end.

“Who knows though, we may just give it another go next year,” she said.

Organisers needed a total of 1,070 Paddys or Patricias to beat the current record which was set in Dubai in 2005 when 1,096 Muhammads gathered.

The Guinness Book of World Records has set down strict guidelines to make sure it is a genuine world record attempt.

Entrants needed to bring a copy of their birth certificate to prove their name and variations of the name Paddy must be agreed beforehand by organisers.

The event, which was called “We’re Counting On You Paddy”, was part of the Twin Towns Gathering Project.