CALL MADE FOR TRAINING OF VOLUNTEERS TO FIGHT GORSE FIRES

A West Donegal based independent community activist has called for Donegal County Council to establish a training programme to instruct volunteers on the best methods of fighting gorse fires. 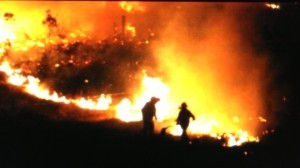 His comments come in the wake of gorse fires in the Dungloe and Rosses area this week.

“Given the increase in gorse fires throughout County Donegal in recent years, some of which have done considerable damage I think the County Council, in conjunction with the Fire Service, should give serious consideration to launching a training programme which would give local volunteers the know-how to fight such fires.

“Fires such as the ones we have seen recently in the Dungloe, Gweedore and Keadue areas could quickly be brought under control if people who live local to the fire were properly trained in dealing with an event such as a gorse fire.

“These fires can cause widespread disruption and huge environmental damage if they manage to get out of control, as we have seen especially in 2011. When this happens the fire service are then stretched to their operational capacity and this in turn puts lives at risk. Having the fire service tied up in fighting gorse fires is also a huge drain to the tax payer.”

He concluded, “If we had local women and men properly trained to operate volunteer units to fight gorse fires they then could make the assessment if they can bring the fires under control themselves and whether or not the fire service need to be called out. In the interests of the community, the environment and most importantly human lives, I think it is incumbent upon Donegal County Council to give this serious consideration.”