Letterkenny Town Council has agreed to spend €25,000 on speed ramps and other measures on a notorious accident blackspot in the town. 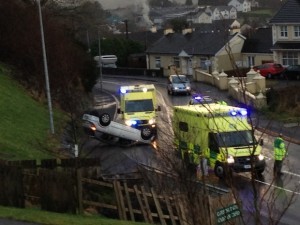 A recent crash at Glencar

There have been more than 20 crashes at Glencar near Black’s Bridge with residents up-in-arms over the lack of road safety measures in the area.

The concerns were raised at a recent meeting of the council which resulted in Town Engineer John McCarron carrying out a safety audit in the area.

The measures include ramps at the Town side of Blacks Bridge. This flat topped ramp will also act an uncontrolled pedestrian crossing.

Also to be implemented will be a temporary construction of a chicane for traffic heading into town which will manoeuvre and consequently reduce the speed of motorist.

If this measure operates well a permanent chicane will be implemented.

There will also be the provision of two kerbed central islands on raised mounds with flexible keep left bollards to ensure good lane positioning in addition there will also be two islands on the Trentagh side of the bends. The works will be finished off with additional signage along the accident prone road.

Letterkenny Sinn Fein councillor Gerry McMonagle has welcomed the improvements to the road.

“I have been lobbying the council for added safety measures to be included along this particular stretch of road for some time now”.

“There have been over twenty accidents on this stretch of road over this last couple of years.

“So it is welcoming news that the council’s Road Safety Audit has identified that speed was a real problem on this road and that they are now going to introduce measures to reduce the speed of motorist using the road and in doing so increase the safety of pedestrians”.