NOBODY KICKS SAND IN DUNFANAGHY’S FACE AS IT CLAIMS WORLD RECORD!

A Donegal community has kicked sand in the face of its rivals by breaking a unique world record. 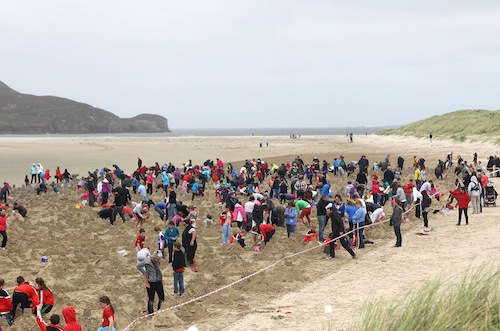 The scene of the record attempt!

Last summer the people of Dunfanaghy attempted to break the world record for the most number of sandcastles built in one hour.

And the group have now received confirmation that they will be in the Guinness Book Of Records after managing a staggering 1939 castles thanks to the work of a number of groups.

The previous record of 683 was held by Yorkshire Water in the UK.

Co-organiser Sian McCann said they were delighted to have broken the record but didn’t think they would literally blow it out of the water.

Credit must also go to one Cliffy Kelly (banished from Letterkenny and now living in Dunfanaghy!) who did commentary on the day of the record attempt.