WOMAN ESCAPES SERIOUS INJURY AFTER ANOTHER CRASH AT ACCIDENT BLACKSPOT

Gardai are at the scene of another serious car smash at a notorious accident blackspot in Letterkenny. 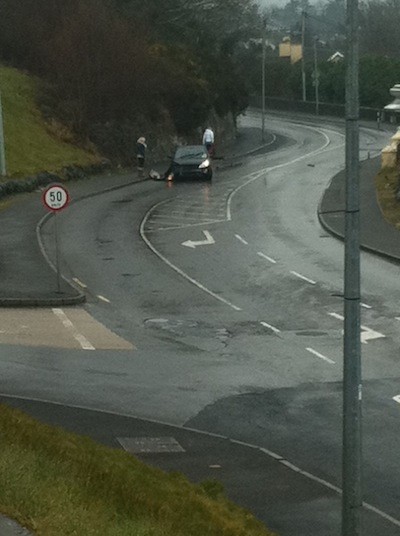 Another car is involved in an accident at Glencar, Letterkenny.

A female driver has escaped serious injury after she lost control of her car at Black’s Bridge in the Glencar area of the town.

The accident happened just after 2pm as some children were leaving school.

Only this week Letterkenny Town Council finally promised €25,000 to improve road safety in the area.

It comes after more than 20 crashes in recent months on the lethal stretch of road.

The improvements include speed ramps and more signage on the road.

“This is just another reminder that these measures cannot come quick enough. We have been lucky than of the more than 20 crashes, nobody has been really seriously hurt.

“We are grateful the council is taking this matter seriously but we need the safety measures to be implemented as quickly as possible.

“With each passing day motorists and pedestrians are taking the lives in their hands on this blackspot,” he said.