SHANE MISSES OUT ON VOICE OF IRELAND BUT DOES DONEGAL PROUD 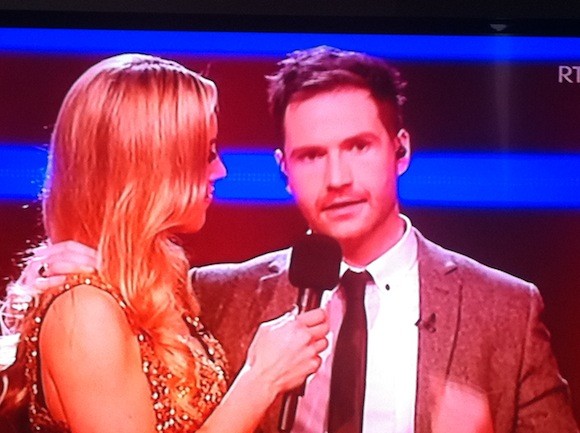 Donegal singer Shane McLaughlin done Donegal proud as he just missed out on being named RTE’s Voice of Ireland.

The Downings singer silenced the begrudgers once and for all with an amazing final performance.

He was eventually came third place behind Kelly Mongan and winner Keith Hanley.

“I think we have the beginning of a rock star here. We’ve had a lot of great fun and it’s not over for this man,” he said.

Shane thanked his “amazing family” and all his fans and said he had enjoyed every minute of his time on the show.

Not even an early stage invasion by presenter Kathryn Thomas could spoil Shane’s big night.

The 28 year old, who was slated by some judges earlier in the series, has grown stronger and stronger throughout the series.

And tonight he put in two amazing performances of The Stunning’s ‘Brewing Up A Storm’ and The Frames’ ‘Fake’ to win over the judges.

Even Shane’s biggest critic, Jamelia, changed her mind on Shane and admitted she fancied him!

“It was fantastic and this is what I have been waiting for. And it’s only because I fancy you,” she laughed.

Sharon Corr said Shane was officially good from now on.

“This beautiful tone has crept into your voice and it’s very sexy,” she added.

Bressie said to Shane “You have figured it out and that’s why you are here.”

Shane’s loyal mentor Kian who has backed him from the start said he was so proud of Shane.

“You’ve had a lot of knocks from people sitting in a similar chair to mine and you didn’t deserve it,” he said.

SHANE MISSES OUT ON VOICE OF IRELAND BUT DOES DONEGAL PROUD was last modified: April 29th, 2013 by Stephen Maguire
Facebook0Tweet0LinkedIn0Print0
Tags:
shane mclaughlinVoice of Ireland