written by admin May 15, 2013
FacebookTweetLinkedInPrint 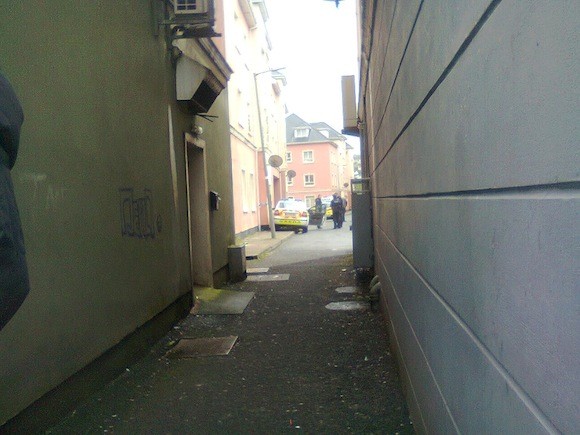 GARDAI have begun a murder inquiry in Letterkenny today after the body of a man was found in a flat there.

Officers moved into the area around the Riverside apartments just before lunch after a Polish national was found stabbed to death.

A number of Garda vehicles are at the scene.

It’s understood the body of a man – believed to be a foreign national – has been found at the scene.

Initial inquiries are believed to have led Gardai to conclude the man was murdered.

The victim had suffered several serious injuries. It’s believed the Polish man had been stabbed.

Gardai later extended the cordon around the block of flats as the investigation quickly escalated.

It’s understood the dead man, who was in his 40s, has been living in Donegal for some time.

Local residents have expressed shock at the incident.

“Gardai arrived very quickly and they soon cordoned off the area,” said one resident.

“It’s just awful to learn that someone has lost their life here where we live.”

The State Pathologist’s office has been informed.

A Garda spokesman said: “Gardai in Letterkenny are investigating all the circumstances surrounding the discovery of a man’s body at an apartment at Lower Main Street, Letterkenny at approximately 11am this morning 15th May 2013.

“The body of the man in his early 40s remains at the scene.

“The scene is currently preserved for a technical examination and the State Pathologist Office has been notified.”