CORNCRAKES ALIVE AND WELL AS FIVE HEARD ON TORY

written by Stephen Maguire May 21, 2013
Facebook0Tweet0LinkedIn0Print0

The corncrake is alive and well on Tory Island. 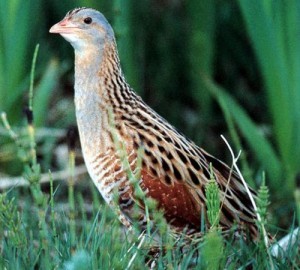 The extremely rare and secretive bird has long made its summer home on the Donegal island.

Birdwatch Ireland has now confirmed that “at least” five calling males have been documented on the island.

At least three of these birds are located within the Birdwatch Ireland management area on the island (an increase for this area on last year).

However, Niall Hatch of Birdwatch Ireland says it is too early to get an idea of breeding birds on the island as it does not take place until the beginning of June at least.

Because the birds fly in from Africa to spend the summer in Ireland other parts of Europe, some corncrakes may not have even arrive in Donegal yet.